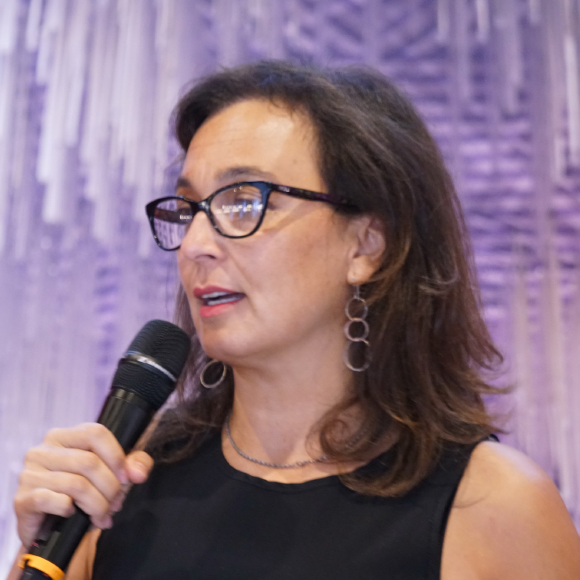 PhD in public policies for the territory, graduated in Architecture, she is an Architect and an expert in participatory communication and public conflict mediation. She is the founder of Avventura Urbana, leading Italian enterprise in participatory planning and public conflict mediation, which she directed from 1992 until January 2016, and of which she is still a member.

In 2015 she became Government Extraordinary Commissioner for the High Speed/High Capacity line “Terzo Valico dei Giovi” (Third Pass of Giovi), nominated directly by the the, at the time, Prime Minister, with a mandate to mediate local conflicts. In December 2018 she resigned from her governmental role to accept a position as Campaign Manager for Italy and South East Europe for Airbnb, with the task of mediating regulatory conflicts between the American multinational and public institutions. She left office at Airbnb in the end of November 2019.

Together with her partner Andrea Pillon, she contributed to the promotion of public conflicts mediation, through events like “Scuola per la democrazia” (School for Democracy) promoted by “italiadecide” and held in Aosta in November 2018; the conference “Il dibattito pubblico per opere condivise” (Public Debate for Concerted Big Public Works) organized by the University of Turin in 2018; the French-Italian seminar “Grandi opere: contestare, partecipare, decidere” (Big Public Works: Contesting, Participating, Deciding) run by Biennale Democrazia in Turin in 2013; and the seminar “Prevenzione e gestione dei conflitti nella realizzazione di grandi infrastrutture” (Conflict Prevention and Management in the realization of big public works) hosted by “italiadecide” at the Chamber of Deputies in 2012.

She taught at some of the most important universities and training centers in Italy and abroad: since 2001 (until now) she has been teaching public conflict mediation on the Master ProPart – Interactive and Participatory Planning, run by the Iuav University of Venice. She has been Adjunct Professor at the Sorbonne University of Paris from 2010 to 2017, where she taught conflict mediation for the Master “Affaires Publiques: Ingénierie de la concertation” (now the teaching passed on to her partner Maddalena Rossi). She also taught participatory processes on the World Bank’s Public Financial Management and Accountability Program in three provinces of the Democratic Republic of Congo in 2013 and 2014. Moreover, she has been Adjunct Professor at the University of Siena from 2012 until 2013, where she coordinated the Tuscan inter-university Consortium’s Master “Formazione di esperti nella progettazione e gestione di processi partecipativi” (Expert training in participatory processes’ planning and management). She coordinated the two-years course (2010-2012) “Progettazione partecipata per le politiche pubbliche” (Participatory Planning for Public Processes), attended by the executives and the officials of Emilia-Romagna Region, and in 2009 she won a Fellowship at the German Marshall Fund of the United States in Washington DC, for a four-months residency, during which she conducted a research on public consensus building.

She wrote, together with Luciano Violante and Andrea Pillon, the volume “Il dibattito pubblico per infrastrutture utili. Manuale di applicazione della nuova legge” edited by “italiadecide” and published by Rubettino in 2018, and she is the author of the book “Cosa fare, come fare. Decidere insieme per praticare davvero la democrazia” – with an introduction by Gustavo Zagrebelsky, published by Chiarelettere in 2012. Moreover, she authored the word “Facilitation” in the “Dictionnaire critique et interdisciplinaire de la participation” for the Groupement d’Intérêt Scientifique «Démocratie et Participation» and she is the co-author (with m. Sclavi et al.) of “Avventure Urbane, progettare la città con i cittadini”, published by Elèuthera in 2002 (IIIrd reprint in 2002). Finally, she also wrote the chapters regarding participatory methods in the manual for inclusive decision-making “A più voci”, coordinated by Luigi Bobbio on behalf of the Presidency of the Council of Ministers (2004).